Since early 2013 Knight Foundation has been using Fluxx to optimize its grantmaking processes to fund more grantees in a shorter amount of time, allowing the foundation to concentrate more on portfolio-level strategy.

But Dan Schoenfeld, Director of Grants Administration at Knight, is not content to rest on his laurels. He had a nagging suspicion that – for a subset of Knight grantees – he could figure out a way to make the foundation’s grantmaking processes even more efficient, bringing even more value to both Knight and its grantees.

“The one thing that still bugged me was the category of grants that we call ‘straightforward grants’ (less than $75,000),” Schoenfeld said. He was certain he could use Fluxx to take an already extremely efficient process and make it even more optimal.

The foundation came up with an expedited grant process created in Fluxx, bypassing standard approval. “It’s literally two steps,” Schoenfeld said. “These grants can be done on a Monday morning and a check can be ready by Monday afternoon.”

Now Knight program staff doesn’t need to spend nearly the amount of time on smaller grants. “None of these grants are going to strategically change our program-wide portfolio. It allows program staff to spend more time on the multi-million dollar grants and less time, from an administration point of view, on the smaller grants,” Schoenfeld said.

This doesn’t mean that these smaller grants are less important to Knight and clearly not to Knight’s grantees. On the contrary, smaller grantees benefit immensely from the expedited process. One of Knight’s expedited grants means proportionately more to a relatively small grantee organization.

Schoenfeld continued, “We get notes from arts grantees all the time saying, ‘Hey if I don’t get this check by Friday I can’t pay my rent for this space where I’m supposed to be putting my exhibit.’ The good news is we can get a check out in 24 hours to make sure they have it.” 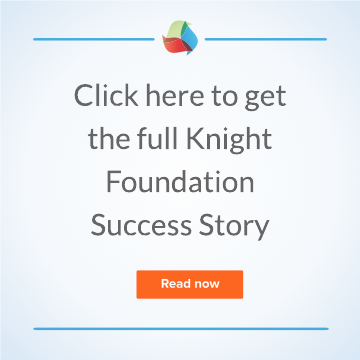